*Disclaimer: This review is spoiler-free. All pictures are from the first three episodes.

In her second year of high school, Tamaki Mari comes to a devastating realization: she’s never done anything completely self-driven! Ready to embark on an exciting adventure, Mari befriends another student, Kobuchizawa Shirase, who’s planning a journey to Antarctica in hopes of learning what made her now deceased mother so fascinated with the place. As the two plan their trip to the mysterious snowscape, they realize the difficulties of such an expedition, and also learn about the beauty of the people around them!

This is a story of youth, self-discovery, and new adventures; this is the story of the place further than the universe.

Sora Yori mo Tooi Basho, or A Place Further than the Universe, is a Madhouse production that aired this past winter. Personally, I had moderate expectations for the show; the staff had plenty of prominent members from the Love-Live and K-On production crews, so I expected another decent slice-of-life show. What I got, however, was much more than just simple slice-of-life, but a fantastic episodic adventure show about the various chaotic struggles and questions of youth.

Before I start reviewing in-depth, I implore any high-school/college students to go ahead and watch the first episode. It perfectly introduces one of the core themes of the show, and it has a fantastic message that I think many students can relate to. In addition, enjoyment of this episode may be the best indicator of how much you’ll enjoy the entire series, so go ahead and watch it.

If you’re still reading, I assume you need a bit more convincing, so let’s start with the pros of SoraYori. The greatest strength of this anime is easily the characters and the heart behind their trip. There are four main characters, each of whom have their own unique backgrounds, goals, and personal struggles. On one hand, we have the energetic but clueless Mari, who just wishes to explore the world freely. On the other hand, we have the shy yet stubborn Shirase, who wants to reconcile with her mother’s disappearance in Antarctica by traveling there herself. My personal favorite of the four, Yuzuki, is a lonely child actress who joins the journey as a TV broadcaster, but deep down, simply desires to travel with her first real friends. Now there is another, fourth character, Hinata, but I’ll get to her later.

These four characters are all well written, with each of the episodes putting one or two of these characters on the spotlight, revealing their inner struggles and the lessons they learn from their friendships. Their conflicts all feel real and tangible, and their varying backgrounds lead to an entertaining crew with perfect chemistry. Dialogues are always brimming with personality, and their interactions can range from gut-wrenchingly emotional to hilariously adorable. This is a team you won’t get tired of.

The story itself, as mentioned, is episodic, but the overarching plot of reaching Antarctica works effectively to continuously create fresh, new environments and situations for the characters to face. The process of reaching Antarctica is well-detailed too; I would be lying if I said I didn’t learn a lot about Antarctic expeditions from this show. Overall, the story serves as a fine device to hold beautiful character-specific arcs, leading to one hell of a satisfying ending when all four characters conclude their personal stories along with the expedition itself.

The visuals are both expressive and magnificent. It’s clear that staff from Love-Live and the likes are at work here, as the characters have exaggerated facial expressions and energetic movements that work to keep the show’s light atmosphere. The scenic wide-shots are absolutely gorgeous, achieving the impressive task of portraying the pure, untainted beauty of the Antarctic landscape. Lighting and shadows are consistently detailed throughout the show, and elevate backgrounds to look absolutely stunning at all times. Lastly, character designs have a simple yet fitting charm to them. In short, the show looks great. 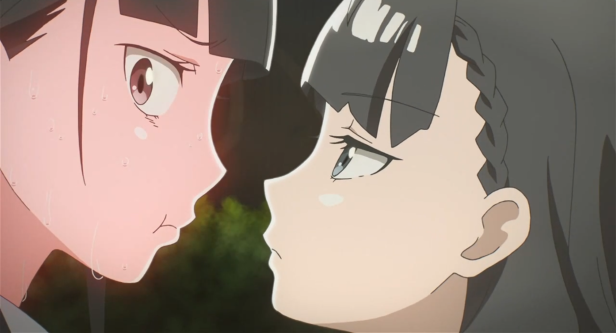 Lastly, the soundtrack to SoraYori is definitely praiseworthy. The best part of the soundtrack ultimately lies in the insert songs, which are all sung by the VAs themselves. For most of the episodes, these tracks play at the very end, placing a poignant extra touch of emotion at the end of each mini-story. By the end of the show, these insert songs really grew on me, making each time it played just that much more emotional. Aside from these, the overall soundtrack works great too, with certain sequences taking advantage of the upbeat soundtrack for some comedic moments. The opening and ending are equally delightful, and they both have great, distinct visuals and camera movement to accompany them.

Now there are still a few problems to the show, albeit not incredibly detrimental ones. The first and foremost negative lies in the character of Hinata for me. You might remember that I didn’t mention Hinata’s motivations above. Well, that’s because her motivation is easily the weakest one. While Hinata does receive some great episodes dedicated to her story and conflicts, I found her original motivation to be lacking compared to the other shining characters. That might just be me though, as I might not have resonated with her story due to my personal background.

Other than that, the show does have jarring shifts in tone at times. Due to the comedy-drama nature of the show, there were several moments where the episodes failed to transition smoothly between the emotional and the comedic. This also ties into another problem; dialogues and interactions can feel unnatural at times due to the script’s efforts to convey characters’ complex emotions. An unfortunate example of “tell, not show,” the show did suffer at times from giving overly heavy interactions packed with conflicting emotions right after a relatively lighthearted scene.

These problems aren’t too detrimental to the show, but I think it’s good to know about them. I do think different audiences might find certain characters less interesting like I found Hinata to be, so experiences with this anime will vary quite a bit. But with that said, that pretty much concludes my review!

SoraYori is an entertaining anime packed with youthful energy and filled with adorable character interactions. Between the comedic moments lies a strong, passionate tale about the various inner conflicts of the young girls, and the powerful emotional moments are accentuated by stellar visuals and terrific insert songs. While tones clash at times and certain characters may not resonate with audiences, SoraYori is an adventurous, joyous anime that many young adult audiences may relate to.

SoraYori is a fairly unique show so the similar shows might be a bit weird. Anyways, Love-Live is the closest thing to SoraYori I’ve watched. As mentioned, they share some staff members, but what’s really similar between the two is the overall mood. Love-Live is filled with character comedy and (sometimes jarring) emotional moments, and gives a fun, comfy vibe similar to SoraYori. I personally recommend Love Live Sunshine, but any in the series is applicable.

K-On also shares some staff members with SoraYori. I haven’t seen K-On yet, but I know it’s one of the best slice-of-life, cute-girls-doing-cute-things anime in the market. It should have the similar sense of warmth and fluff as SoraYori.

Shoujo Shuumatsu Ryokou (Girls’ Last Tour) is a criminally underrated show, focusing on two girls’ friendship as they travel across a post-apocalyptic wasteland. Despite the grim setting, I’ve heard the show is cute, warm, and emotional, not too different from SoraYori.

Tsurezure Children is the last, weirdest recommendation, focusing on the youth struggles in romance. It has lovable characters and tons of hilarious comedic moments, and it’s extremely easy to relate to due to the diverse cast. A cute, fun show with positive energy familiar to that of SoraYori, this is a short but sweet treat full of understandable, likeable characters.

That concludes my review. Thank you so much for reading, and I again implore the high-school audiences to check out at least the first episode right now. It’s really relatable.

I have a huge review coming up soon: my review for Maquia: When the Promised Flower Blooms. I’ve been looking forward to it for months now, and I’m so excited to see it in the big screen. I’m hoping it’s an absolute masterpiece, but I am also trying to keep my hype in check. One thing is fairly certain: I’ll be bawling my eyes out.

With that said, I hope you have a nice day, and see you later! Thanks!